An American man was rescued from the Saigon River Saturday by the municipal border guard force after residents alerted them to his plight. 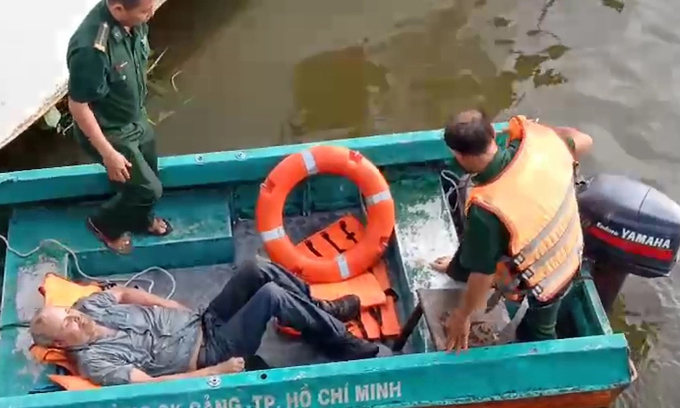 At around 6 a.m. Saturday, border guards on patrol, alerted by local residents, rescued Paul Gardiner Kehey, 60, trapped under a pier at the Bach Dang Wharf.
Kehey told the official that he has been a Saigon resident for 15 years and that he worked as a lecturer at the Banking University of Ho Chi Minh City.
On Friday night, after having a few drinks with his friends, Kehey was driving home on his motorbike when he was waylaid by three strangers who mugged him, took his passport, house keys, and a wallet with around VND3 million ($131) in cash. The robbery happened on Dong Khoi Street in District 1, Kehey told his rescuers.
Kehey also said he gave chase to the robbers until the Bach Dang Wharf from where they threw his passport into the Saigon River.
The American man jumped into the river in an attempt to retrieve his passport, but was trapped under the pier overnight, he said.
Kehey was given medical assistance and food before being admitted to the Cho Ray Hospital in District 5 for further monitoring. He is in stable health now, doctors said.
A police officer in District 1 told VnExpress that his unit has taken Kehey's testimony and is investigating the case further, collecting information from locals as well as cameras in surrounding areas to verify the American’s account.

Hello, guys!
I'm a beautiful and naughty girl who wanna be your lover and friend!!
Come and see:
My nick DanaRaing >>> View profile
You must log in or register to reply here.